The Holes at the Poles

Rob McElwaine is an occasional poster of crackpot notions on Usenet, but here's one that he backs up with photographic evidence. Can you really believe your eyes, or would a moment's thought have exploded a delusion?

His post refers to a lot of hearsay and ambiguous personal reports, but his opening remarks refer to the "remarkable" photographs taken by a couple of polar orbiting satellites in the late 1960s, purporting to show the north polar hole, which is some 1400 miles across.

Notwithstanding other evidence, such as expeditions to the poles, other satellite photos, long term polar research bases, let's concentrate on Mr. McElwaine's two cited photos and see what they show by themselves.

The first photograph referred to by McElwaine was taken by ESSA-3 on January 6, 1967: 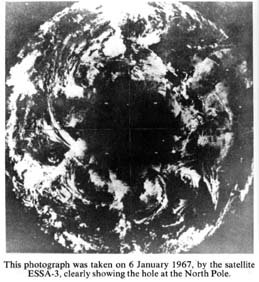 The caption includes the words "clearly showing the hole at the North Pole." If this is indeed the case, then it is nothing short of remarkable, as the North Pole is in complete darkness at this time of year!

There are other extremely suspicious things about this photograph. Not just the "hole", but the entire visible hemisphere of the Earth is in sunlight - clearly impossible unless the pole is oriented directly toward the sun. This is not, of course, the case. At no time during January 1967 was the entire Northern Hemisphere simultaneously bathed in sunlight.

Oh, and another thing. If the interior of the Earth is illuminated by "a glowing ball of plasma, about 600 miles in diameter", why don't we see a bright disk instead of a dark hole?

Answer: it's a composite photo. ESSA-3 was a polar-orbiting satellite, and this image is a clearly a montage produced by NASA from a number of separate half-lit images to give a measure of global cloud cover. 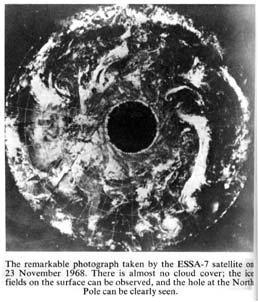 Again, the same observations about lighting apply to this photograph. January 6 is as close to midwinter as makes no odds, and everything within the Arctic Circle should be completely hidden from view.

It's a composite image again. Long, straight lines radiate from the edge of the "hole" at around 7 o'clock and 9 o'clock, reaching the the Equator, and in the case of the 7 o'clock line, considerably further, indicating that this is stuck together from several smaller images. The bright rim is almost certainly and edge-of-frame artifact from the camera rather than any physical effect.

If there were indeed holes at the poles, why do we not see them in pictures taken from the ESSA satellites in July, for example?

Well, I don't suppose it came as a surprise that the most cursory of examinations shows that Mr. McElwaine's photographs do not show holes at the North Pole, and that even his own description of the illuminated interior implies something quite different from what is seen here.

This is, of course, all good news for the guys in the research stations within the supposed hole region, but it's bad news for McElwaine since it just shows him up as just another deluded soul in a long line of net.kooks.