I, Sean Ellis, was born in the summer of 1966, just in time to help England win the world cup in July. I didn't play, of course (I was Hurst's substitute) but I did design Bobby Charlton's hairstyle and that really tipped the balance of power our way.

My pre-school years were halcyon days. It snowed every winter, was sunny every summer, there was no discontent of any kind, and I got a part-time job at NASA at age 4.

Unfortunately, Neil Armstrong got the actual job of walking on the moon first, but after the Apollo 13 disaster, McDonnell-Douglas were fired and a new command module "Kitty Hawk" was commissioned from Fisher-Price. And, in February 1971, I was given the code name of Stuart Roosa and the command of Apollo 14. Unfortunately, when I turned five and was sent to school the original design was reinstated. There's no way that one person can cope with a full kindergarten schedule and rigorous astronaut training, and no-one else could get the hang of the little squeaky thing on the steering wheel.

Kindergarten was fun. It was relatively easy to show that Lego could be used to build general-purpose computing devices, and the sandbox was an excellent introduction to particle dynamics. I realised early on that tales of my early astronautics were met with incredulity, so I tried very hard to blend in, acting in every way like a normal five-year-old. 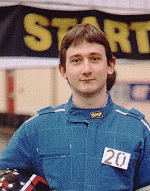 The Author during Space Training (20 is my Astronaut Candidate Number)

This "heads down" mentality continued all through my school career, where I was regularly picked on for having short hair and strange ears. The one in the small of my back was the strangest, apparently having grown into the shape of Yugoslavia. I have to take this on faith, since obviously I have never actually seen it. However, I soon found a way to relieve the boredom by inventing false personalities.

My most successful was probably the unlikely character of Evonne Goolagong. I disguised myself as a woman in order to win Wimbledon in 1979. It was a very proud moment for me, and I went back to win again in 1980. I still have the massive gold and silver plate somewhere in my attic. You are supposed to give it back, of course, but playing under a pseudonym gives you a real advantage in this sort of area. The climate at the time was such that the police arrested every Irish person within two miles of Wimbledon, but didn't even think to check the games kit of a fourteen year old schoolboy.

Having sat 118 O-levels (and failing only Art, with a D grade; my picture of Dorian Gray failed to age convincingly), it was time for the sixth form. My lower sixth physics project was a failure - no-one believed that high-temperature superconductivity was possible and we didn't have the budget for liquid nitrogen to prove it. The school performance of my play "Romans in Britain" went down a storm, and succeeded in its primary aim of annoying Mary Whitehouse.

Sensing a possibly lucrative career, the next year I managed to sell my next masterwork, "The Hitler Diaries" to The Times for a quite astounding sum of money. It was great fun to watch all the editors there and at Der Stern squirm when they found out it wasn't true! I resolved immediately to become Britain's finest liar.

Having obtained my obligatory 44 A-levels, I was then sent to University at Reading. I preferred this to Cambridge or Oxford because it does not have as many high scoring Scrabble letters in its name.

During this period I remember observing the way that the washing machines in the launderette moved about, and I noted this in my diary. Unfortunately, the diary was stolen and the culprit was never caught. It can hardly be a coincidence, however, that Clive Sinclair launched the C5 only three weeks later.

Immediately after University, I joined the writing team on "Eastenders", producing such loveable characters as Donna the drug addict. This quickly achieved its primary purpose by annoying Mary Whitehouse.

Today, I am one of Britain's best loved comedy entertainers, with a string of hit records to my name (who can forget "Shaddapayouface"), and live in a semi-detached castle in Epping Forest.

This isn't a simple mailto: link, I'm afraid, because of the amount of junk e-mail I seem to be getting. The e-mail address in this link is nearly correct - you'll need to remove the "ww-" after the "@" before you can actually mail me. It's still a geocities address, but I am in the process of publishing a spamtrap address with some watertight legal stuff so I can charge people for sending me spam. Don't worry - it'll still get to me, though.